2019 SUMMARY: A HUGE SUCCESS!
The year started with a Canadian winter tour of Whynot Theatre’s nationally acclaimed Prince Hamlet, which secured more stellar reviews. Dawn Jani’s performance as Horatio was particularly singled out for praise, with one reviewer stating that “her onstage energy is unrivalled.”
After that, she jumped into another exciting ground-breaking production, The Black Drum, an extraordinary, signed music musical that was co-produced by the Deaf Culture Centre and Soulpepper Theatre in Toronto. The show went on to perform at Clin d’Oeil, a prestigious Deaf Arts festival in France, and a tour of the play is currently being planned. Toronto’s BroadwayWorld quoted, “As the heroine of the story, Birley delivers a powerhouse performance throughout the show.”
For the autumn season, Dawn Jani returned home to Finland to work with Espoo City Theatre in their debut of Sanaton Rakkaus (Children of Lesser God). Casted as Sarah opposite Santeri Kinnunen (as James), the show was “the talk” of the city with sold out tickets nearly every night and earned overall praise from many commenters with following remarks in Finnish, “Sanaton rakkaus -näytemässä hän oli erittäinen vakuuttava ja ilmaisuvoimainen Sarahin roolissa,” and “Sanaton rakkaus on ehdottomasti Birleyn näytelmä. Toivoisin näkeväni hänet jatkossakin muissa teatterituotannoissa.”
stage theatre
film / TV / music
education / training
teaching and workshops
appearances
awards / recognition 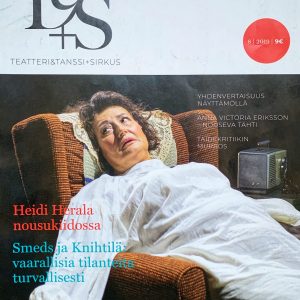 I was invited to write an article in a Finnish magazine Theatre&Dance&Circus, on page 32-33, about how deafness is often being used as an excuse not to hire or work with Deaf actors.